OMAHA (FWAA) – A center on the nation’s fifth-best rushing offense and national title contender, the highest-graded offensive tackle throughout the season and one of the nation’s top pass-rushing threats are the three finalists for the 2022 Outland Trophy as selected by the Football Writers Association of America. 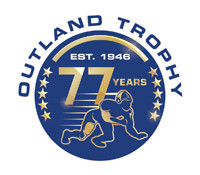 The Outland Trophy is awarded annually to the nation's best college interior lineman on offense or defense. The All-America Committee of the Football Writers Association of America (FWAA) selected the finalists.

The recipient of the 77th Outland Trophy will be announced on The Home Depot College Football Awards, live in a virtual presentation on ESPN on Dec. 8. The official presentation to the winner will be made at the Outland Trophy Awards Dinner sponsored by Werner Enterprises and produced by the Greater Omaha Sports Committee in Omaha, Neb., on Jan. 11, 2023.

Here is a glance at the three finalists:

Calijah Kancey, DT, Pitt (#8, 6-0, 280, Jr., Miami, Fla.): Kancey is the among the national leaders with 14.5 tackles for loss (t-21st in FBS) and 7.5 sacks (t-45th). The pass-rush specialist is also a finalist for the Bronko Nagurski Trophy, the FWAA’s award honoring the nation’s most outstanding defensive player. Kancey is eighth on the Panthers’ defense with 31 total tackles with 17 solos. Bolstered by his efforts on the inside, Pitt leads the nation in sacks with 3.75 per game and is seventh nationally against the run (95.5).

Pitt has a rich Outland Trophy tradition. Beyond previous winners Donald and May, Mark Stepnoski, a guard, was a finalist in 1988.

Olusegun Oluwatimi, C, Michigan (#55, 6-3, 307, Gr., Upper Marlboro, Md.): Michigan is one step from earning its 44th Big Ten championship and a return to the College Football Playoff in large part due to its offensive line success ahead of its run game. Oluwatimi was a second-team FWAA All-American at Virginia in 2021 before becoming a graduate transfer to Michigan last spring. He has 43 career starts at center between the two schools. Michigan is fifth nationally in rushing at 244.5 yards per game. The offensive line was never better than last week at Ohio State, when the Wolverines out-rushed the Buckeyes 242-19 in the second half and prompted reserve running back Donovan Edwards’ 216 yards and two touchdowns in the decisive win. In the passing game, Michigan has yielded only 13.0 sacks (16th in FBS) and 55.0 total TFL’s (31st) this season.

Peter Skoronski, OT, Northwestern (#77, 6-4, 315, Jr., Park Ridge, Ill.): Skoronski has been among the top-graded offensive linemen all season and finishes the season atop all FBS tackles with a 93.7 pass blocking grade according to Pro Football Focus. One of the Wildcats’ captains with 31 career starts, Skoronski has allowed only six pressures on 480 pass-blocking snaps this season. A two-time All-Big Ten player – second team in 2020 and first team in 2021 and now likely 2022 – his run-blocking grade is also in the top-15 per PFF.