FWAA and NFF Team Up for Poll for Eighth Time

DALLAS (FWAA) – The Football Writers Association of America (FWAA) and the National Football Foundation (NFF) & College Hall of Fame announced today that they will partner for the eighth time to conduct The FWAA-NFF Super 16 Poll, the organizations' weekly major-college football poll. 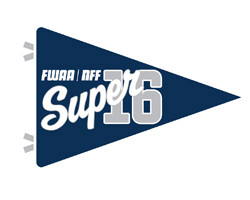 The results will be released by 12:30 p.m. ET each Sunday of the 2022 regular season, and the plans include a preseason poll on Aug. 16. The first poll of the regular season will be released on Tuesday, Sept. 6, to account for the games that will be played on Labor Day. The last poll will be released Sunday, Dec. 4, the day after the conference championship games. There is no final poll after the bowl games, but the NFF will award its historic MacArthur Bowl National Championship Trophy to the winner of the College Football Playoff National Championship.

"We are proud to continue our partnership with the FWAA on the Super 16 Poll," said NFF President and CEO Steve Hatchell. "We believe that our voters offer an extremely credible set of opinions, and we hope that the combined respect of both our organizations will continue to provide a compelling reference point for fans to follow during the season."

The voters in the poll consist of FWAA members and College Football Hall of Famers. The poll aims to draw on the vast knowledge of the nation's top journalists with extensive experience covering college football in combination with some of the greatest legends to have ever played or coached the game.

"We are extremely excited to continue the Super 16 Poll and partner with the National Football Foundation," said FWAA Executive Director Steve Richardson. "We have had a great experience with the poll, and we look forward to extending it for another year. Our poll includes some of the most knowledgeable and objective college football minds in the country, and we believe it has developed into a compelling instrument for ranking the best teams in the country."

The decision to conduct the poll was made by the boards of both organizations at the conclusion of the 2013 season and the end of the Bowl Championship Series, building on a relationship that stretches back to the 1940s when both groups were founded. The 2022 poll will tally the votes of 52 individuals (40 from the FWAA and 12 Hall of Famers) on a weekly basis, ranking the top 16 teams in the NCAA Division I Football Bowl Subdivision.

The names and affiliations of the 2022 voters are listed below, and their individual rankings will again be made public each week during the season. The FWAA voters, all current members of national stature, are selected to ensure balanced-geographical representation. The NFF voters, comprised of Hall of Fame players and coaches, also add to the diversity of perspectives, coming from different conferences and regions of the country.

ABOUT THE FOOTBALL WRITERS ASSOCIATION OF AMERICA
Founded in 1941, the Football Writers Association of America (FWAA) consists of journalists, broadcasters, publicists, photographers and key executives in all areas of college football. The FWAA works to govern media access and game-day operations while presenting awards and honors, including an annual FWAA All-America Team. For more information about the FWAA and its program and initiatives, visit footballwriters.com .

ABOUT THE NATIONAL FOOTBALL FOUNDATION AND COLLEGE HALL OF FAME
Founded in 1947 with early leadership from General Douglas MacArthur, legendary Army coach Earl Blaik and immortal journalist Grantland Rice, The National Football Foundation and College Hall of Fame is a non-profit educational organization that runs programs designed to use the power of amateur football in developing scholarship, citizenship and athletic achievement in young people. With 120 chapters in 47 states, NFF programs include the selection and induction of members of the College Football Hall of Fame; the Chick-fil-A College Football Hall of Fame in Atlanta; Future For Football; The William V. Campbell Trophy®; the NFF National Scholar-Athlete Class Presented by Fidelity Investments; the NFF National High School Academic Excellence Award; and a series of initiatives to honor the legends of the past and inspire the leaders of the future. NFF corporate partners include Catapult, Delta Air Lines, Fidelity Investments, Jostens, the Las Vegas Convention and Visitors Authority, the New York Athletic Club, the Rose Bowl Legacy Foundation and the Sports Business Journal. Follow us on Facebook, Instagram and Twitter @NFFNetwork and learn more at footballfoundation.org