DALLAS (FWAA) – TCU head coach Sonny Dykes guided the Horned Frogs to a 12-0 start and their first berth in the College Football Playoff in this his first season, thrilling fans along the way with a series of come-from-behind wins behind a dynamic offense that produced a Heisman Trophy finalist. In recognition of TCU's five wins over nationally-ranked opponents and playing at a championship level throughout the season, Dykes has won the 2022 Eddie Robinson Coach of the Year, as selected by the Football Writers Association of America and presented by the Allstate Sugar Bowl. 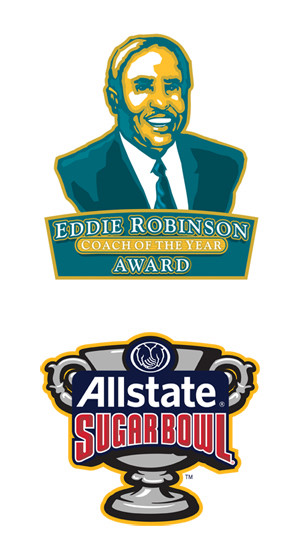 Dykes is only the third head coach in the CFP era to lead his program to the playoff in his first season with his team, joining Lincoln Riley (Oklahoma in 2017) and Ryan Day (Ohio State in 2019). Picked to finish seventh in the Big 12 this season, TCU ascended to the No. 3 spot in both polls and the final CFP rankings. The Horned Frogs are just the second team to get to the CFP after beginning the season unranked in both major polls.

Dykes is a first-time winner of the Eddie Robinson Award, the third in TCU history and the first from the Big 12 since former TCU head coach Gary Patterson won the second of his two awards in 2014 (also in 2009). Dykes was a previous Eddie Robinson Award finalist in 2019 while head coach at SMU. He was selected from voting by the entire FWAA membership from a field of seven other finalists representing all 10 FBS conferences and independent programs. TCU’s three Eddie Robinson Awards tie for third all-time by school behind Ohio State (5) and Notre Dame (4). LSU and Penn State also claim three.

“On behalf of the Sugar Bowl Committee, I want to congratulate Coach Dykes on a memorable season,” said Lloyd Frischhertz, President of the Allstate Sugar Bowl Committee. “It’s truly amazing that in his first year, he has lifted the TCU program to heights not seen since the early days of college football and the school’s national championship Sugar Bowl teams. While achieving that success, he has shown class and sportsmanship worthy of being associated with the name of the legendary Coach Robinson.”

“On behalf of the Eddie Robinson Family, I want to congratulate Coach Sonny Dykes for being named the 2022 Eddie Robinson Coach of the Year. What a remarkable first season guiding the TCU Horned Frogs Program to the College Football Playoffs,” said Eddie Robinson III, the grandson of Coach Eddie Robinson. “Coach Dykes exemplifies what the "Eddie" Award represents.”

"Sonny Dykes, in his first year at TCU, put together one of college football's most exciting and successful teams. The Horned Frogs were never out of a game and posted comeback after comeback behind quarterback Max Duggan. Not surprising, our FWAA members chose Dykes as our Eddie Robinson Coach of the Year over others in a very strong field. Congratulations to Coach Dykes for a fine regular season,” said Steve Richardson, Executive Director of the FWAA.

TCU's five wins over ranked opponents ties for the national lead this season. The Horned Frogs had 21 players receive All-Big 12 recognition from the conference’s head coaches. The FWAA recognized four TCU players on its 54-member All-America team, the most-ever for TCU in one season, with offensive lineman Steve Avila and punt returner Darius Davis honored as first-team members and quarterback Max Duggan and cornerback Tre’Vius Hodges-Tomlinson on the second team. Avila was a semifinalist for the FWAA’s 2022 Outland Trophy.

This is the second time for Dykes to experience success at TCU, but the first as head coach. Dykes was an offensive analyst at TCU in 2017, a season that saw the Horned Frogs post an 11-3 record, reach the Big 12 Championship Game and finish with a No. 9 national ranking following a dramatic rally to beat Stanford in the Alamo Bowl.

During his career Dykes has also been head coach at Louisiana Tech (2010-12) and Cal (2013-16) and has been an assistant to head coaches Mike Stoops (Arizona), the late Mike Leach (Texas Tech) and Hal Mumme (Kentucky). He is the son of the late Spike Dykes, who coached Texas Tech in a school-record seven bowl games and was elected to the Texas Sports Hall of Fame in 2008.

The FWAA has presented a coaching award since the 1957 season when Ohio State's Woody Hayes was named the first recipient. Beginning in 1997, the FWAA Coach of the Year Award has been named in honor of the late Robinson, a coaching legend at Grambling State University for 55 seasons.

Robinson, who passed away in 2007, won 70.7 percent of his games during his illustrious career. Robinson's teams won or tied for 17 Southwestern Athletic Conference (SWAC) championships after joining the league in 1959. His Tigers teams won nine Black College Football Championships during his career, all of it at Grambling.

The Eddie Robinson Award is a member of the National College Football Awards Association (NCFAA), which encompasses college football's most prestigious awards. Founded in 1997, the NCFAA and its 25 awards now boast over 800 recipients, dating to 1935. Visit ncfaa.org to learn more.

The Allstate Sugar Bowl has established itself as one of the premier college football bowl games, having hosted 28 national champions, 100 Hall of Fame players, 51 Hall of Fame coaches and 20 Heisman Trophy winners in its 88-year history. The 89th Allstate Sugar Bowl Football Classic, which will feature the Kansas State Wildcats and Alabama Crimson Tide, is scheduled to be played on Dec. 31. In addition to football, the Sugar Bowl Committee annually invests over $1 million into the community through the hosting and sponsorship of sporting events, awards, scholarships and clinics. Through these efforts, the organization supports and honors thousands of student-athletes each year, while injecting over $2.2 billion into the local economy in the last decade. For more information, visit allstatesugarbowl.org