CHARLOTTE, N.C. (FWAA) – For the second time in the award’s history, a repeat winner has claimed the 2022 Bronko Nagurski Trophy as Alabama linebacker Will Anderson Jr. has once again been chosen as the nation’s top defensive player by the Football Writers Association of America and the Charlotte Touchdown Club. The Southeastern Conference leader in sacks and tackles for loss was honored tonight with the award here. 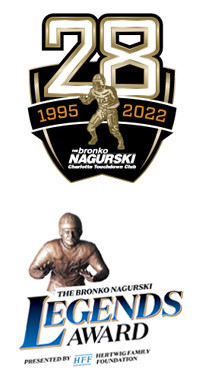 The FWAA All-America Committee, after voting input from the association's entire membership, selected the defensive player of the year who is part of the 2022 FWAA All-America Team. Anderson was presented the trophy Monday night at the Bronko Nagurski Awards Banquet presented by LendingTree in Charlotte, N.C.

One of the most dominant defenders in college football, Anderson is feared by opponents as an edge rusher either at linebacker or standing at the outside of the defensive line. His 10 sacks lead the SEC (with 54 yards lost) and are tied for sixth nationally. He also leads the SEC and is seventh nationally with 17 tackles for loss that cost opponents another 72 yards.

Anderson is Alabama’s fifth-leading tackler with 51 overall stops (24 solos), has an interception with a 25-yard return for a touchdown, and owns 29 quarterback hurries. He is second nationally among all Power 5 defenders in total quarterback pressures (sacks, hits, pressures) with 50 and lists eighth with the solo hurries (29) and hits (10).

He is currently in the top three of Alabama’s career lists in sacks and TFL’s – his 17 TFL’s in 2022 trail only Derrick Thomas (39.0 in 1988) on the Crimson Tide’s all-time single-season list. He has recorded at least one TFL in 28 of his 38 career games and in 11 this season. He has a half-sack or better in eight of Alabama’s 12 games.

In addition to Anderson’s win in 2021, Alabama’s other past Bronko Nagurski Trophy winner was defensive end Jonathan Allen in 2016. The Crimson Tide has now had finalists for the award in 11 of the last 13 seasons.

Anderson is majoring in communications with a minor in sports media and is scheduled to graduate this December. He is a member of Alabama’s leadership group as selected by head coach Nick Saban and contributes with the Crimson Tide’s community service and volunteer efforts.

The Bronko Nagurski Trophy is a member of the National College Football Awards Association (NCFAA) which encompasses the most prestigious awards in college football. Visit ncfaa.org to learn more about our story.