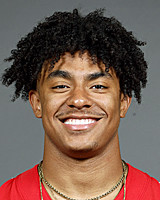 “The past five years it’s been a dream of mine whenever I catch a touchdown, whenever that is, to get on my knees and praise Jesus Christ,” Babb said after the game.

Babb caught an eight-yard touchdown pass from C.J. Stroud in the fourth quarter of the No. 2 Buckeyes’ 56-14 win over the Hoosiers. Ohio State took a penalty after the touchdown in order to celebrate with Babb, as teammates surrounded Babb while he got down on his knees and said a prayer.

The 6-foot, 210-pound Babb was chosen in the preseason to represent Ohio State with its “Block O” jersey, a tradition that began in 2019 and is inspired by Buckeyes great Bill Willis, the College and Pro Football Hall of Famer who broke the NFL color barrier as a member of the Cleveland Browns.

A four-star, top-100 prospect out of St. Louis’ Christian Brothers College High in 2018, Babb is the first non-Ohioan to receive the “Block O” jersey.

Babb has had four different knee surgeries, two on each knee, dating back to high school. The injuries forced him to miss the entirety of the 2018, 2019 and 2021 seasons. He played in seven games during the pandemic-shortened 2020 season, becoming a key contributor on special teams. He then missed the first nine games of this season because of a separate knee injury.

A captain and a three-time academic All-Big Ten honoree who has his undergraduate degree in communications, Babb also spoke at the investiture of school president Kristina M. Johnson last fall.