DALLAS (FWAA) — Clemson’s Bryan Bresee is this week’s nominee for the 2022 Capital One Orange Bowl-FWAA Courage Award. Bresee, a third-year sophomore, started and posted two tackles and one quarterback hurry in Saturday’s win over Furman, before traveling to be with his family as his 15-year-old sister Ella battles an aggressive form of brain cancer. 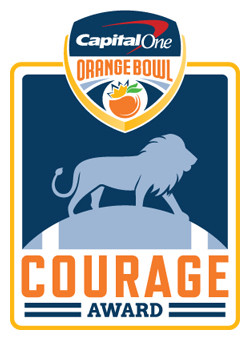 The entire Clemson team wore t-shirts before the game that said “Ella Strong,” with the letter Ls replaced by “11,” which is Bresee’s jersey number.

“Super special,” Bresee said after the game. “I wish obviously my little sister could have been there. It’s a tough situation. Life throws you curveballs sometimes, but you’ve just got to keep pushing.”

Ella Bresee spent part of the week with Clemson’s team and addressed the group on Wednesday. She was scheduled to serve as an honorary team captain prior to the game but was airlifted to a hospital in Washington, D.C., on Friday.

“Super outgoing. Just a good person to be around,” Bryan said of Ella. “She’s always super positive no matter what’s going on. (She) just brings a smile to my face whenever I’m around her, and anybody who’s around her. She was here this week and got to spend some time with the team and the coaches, so everyone got to see that.”

The nation’s No. 1 recruit out of Damascus (Md.) High in the 2020 signing class, Bresee burst onto the national scene as a true freshman, earning multiple freshman All-America honors and winning the ACC’s defensive rookie of the year award. The defensive tackle earned third-team All-ACC honors in 2021 despite being limited to four games because of injury.

The 6-foot-5, 305-pound Bresee has started 16 games across his college career, tallying 54 tackles, 12 tackles for loss, six sacks, two pass breakups, one interception, one forced fumble and one safety.