DALLAS (FWAA) – Richard Johnson of Sports Illustrated is the recipient of the third Edward Aschoff Rising Star Award, which is presented annually by the Football Writers Association of America and named after the beloved ESPN college football reporter who died on Christmas Eve in 2019 on his 34th birthday from previously undetected Stage 4 non-Hodgkin's lymphoma in his lungs.

“It is always an honor to be given an award from your peers!” Johnson, 29, said upon learning he was the third recipient. “This is the only field I’ve ever wanted to work in, and it’s incredibly validating to be recognized.

“I count all my experiences in this field as continued education and there are too many editors and writers to name who have made me better and helped me along the way. I grew up reading many of them as a lifelong college football fan and it’s been incredible to get to know them as I grow in journalism.”

Johnson started at Sports Illustrated  in the fall of 2021. He is known for his long-form storytelling, expertise on the coaching industry, and in depth reporting on the intersection of college sports and social justice with a blend of analysis and candor,

In 2021, Grace Raynor, who covers the Clemson Tigers for The Athletic, won the second Rising Star award. David Ubben, also of The Athletic, was the first recipient in 2020 as a beat reporter for the Tennessee Volunteers.

“Richard's writing in particular is a combination of what makes all the best people in this business, “Ubben said. “It’s informative, well-reported and entertaining. And his television and podcast work has made him a breath of fresh air in a business where some can get stale. His work always includes interesting perspective and anyone who reads something from Richard will finish it having learned something.

“The people who can do that consistently are growing rare. I couldn’t be happier that Richard won this award. He’s everything right about sports writing and makes me so excited about the future.”

In honor of Aschoff, a bright light in the sports journalism industry, the FWAA in 2020 decided to recognize one promising journalist no older than 34, who has not only the talent and work ethic it takes to succeed in this business, but also the passion to make it better. Aschoff, a 2008 graduate of the University of Florida, loved people, and even as his career at ESPN escalated, he still guided and befriended younger journalists along the way.

Johnson, a University of Florida alum like Aschoff, knew Ed personally. The two actually spent time together, most recently in the spring of 2018 when they were reporting stories at Arizona State at the same time. They went to a Phoenix Suns game together.

“I remember when the FWAA announced this award a couple years ago,” Johnson said. “I immediately knew that I wanted to win it, and I guess it’s time to move past my jealousy of past winners David and Grace – I kid as they’re both great reporters who I’ve had the pleasure of meeting on the road the last few years.

“Ed is a prime example of how representation matters,” Johnson added. “There are unfortunately too few Black people covering this sport, and for as long as I’d known him, seeing Ed on television or his byline on the website was proof positive that he’d made it in this industry and that I could too. You could say I basically followed his blueprint from UF’s journalism school to covering the Gators all the way to ESPN, and it was an honor to shout him out during my first season on the SEC Network."

Johnson began his professional career at ESPN in 2015 and later joined SB Nation as a national college football writer the following year. He spent four years working for the site before starting at Sports Illustrated in the fall of 2021.  Johnson co-hosts the SEC Network show “Thinking Out Loud” in addition to co-hosting the college football podcast “Split Zone Duo.” He also makes regular appearances across ESPN linear and digital programming.

He is a co-author of “The Sinful Seven: Sci-Fi Western Legends of the NCAA” – an illustrated e-book about the history of college sports.  Johnson, now based in Brooklyn, began his career as a writer for The Independent Florida Alligator student newspaper.

“Outside of the fact that he knew Ed and looked up to him, RJ has been growing as a writer on our staff, in addition to his continuing SEC Network duties,” said Sports Illustrated Executive Editor Joy Russo in nominating Johnson for the award. “…He has been determined to expand his sourcing profile across the sport, but has also been committed to covering race and inequities within football – the latter has been newer territory for him within the sport, but he’s been dedicated to finding more stories to tell there.”

“It may sound corny, and I don’t care, this really is more than just a trophy to me. “Johnson said. “This is Ed’s legacy, and I’m honored to be able to play a part in continuing it.”

Aschoff moved to Los Angeles in 2017 to begin a more expanded national role that included television coverage. Over three seasons, he reported from campuses across the country for ESPN.com, SportsCenter, SEC Network and ESPN Radio, and he worked as a television and radio sideline reporter during college football games. 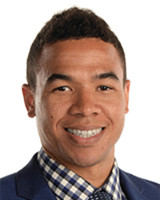 During the 2015 college football season, Aschoff and ESPN.com colleague Adam Rittenberg were winners in the FWAA's Annual Best Writing Contest for their enterprise piece, "The racial impact of Eric Striker." Contest judge Michael Weinreb called it, "An eye-opening, surprisingly frank and timely examination about how college football is affected by issues of race and identity."

Aschoff inspired us through his storytelling, brightened our lives with his gregarious personality, and uplifted our spirits with his energy. The FWAA hopes to honor his memory and his commitment to aspiring journalists with this award.

"Edward epitomized everything you want in a sports journalist: He knew how to build relationships, to gain trust, to break stories but also to tell stories," said ESPN.com's Andrea Adelson. "And he did it all with a flair that made you want to watch his television pieces or read his written stories right away. His dogged determination and relentless work ethic allowed him to rise to the top at ESPN, and all his exemplary qualities serve as a model for young journalists everywhere about what truly can be achieved if you go after what you want." The University of Florida's College of Journalism and Communications has established the Edward Aschoff Memorial Fund, which will provide support for students involved in sports journalism.

"Edward was one of our stars – not just because he was so talented as a journalist and storyteller, but also because of everything he did to help people around him. He always had a good word of advice for young journalists, he was always willing to give back, and he always made people smile," said Ted Spiker, chair of the department of journalism at the University of Florida who taught Edward in several classes at UF.

Jordan McPherson, a student reporter at Florida from 2013-17 who is now covering the Miami Marlins for the Miami Herald, said Aschoff helped him on several occasions. "He was a pro's pro and touched my life with just a few brief interactions that he didn't have to make," McPherson said. "His positivity was infectious, his ability to mentor through simple conversation was second to none. He will be missed, but always be remembered."

Founded in 1941, the Football Writers Association of America consists of journalists, broadcasters, publicists, photographers and key executives in all areas of college football. The FWAA works to govern media access and game-day operations while presenting awards and honors, including an annual All-America team. For more information about the FWAA and its programs and initiatives, contact Executive Director Steve Richardson at 214-870-6516 or tiger@fwaa.com.