2019 FWAA ALL-AMERICA TEAM UNVEILED DALLAS (FWAA) · The Football Writers Association of America, in partnership with the Goodyear Cotton Bowl Classic, is proud to announce its 2019 All-America Team, headlined by 12 players from the Big Ten Conference · nine of them on the first team · and 11 from the Southeastern Conference that includes Heisman Trophy-winning quarterback Joe Burrow of LSU.

Fifty-four standout players were selected to two teams by the association's All-America committee after voting from the entire membership. Since 2013, the FWAA has named a second team. Overall, there are 35 schools represented from eight Football Bowl Subdivision conferences, including 14 players who are competing in the College Football Playoff and three repeat selections. 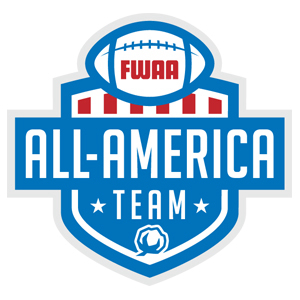 The Goodyear Cotton Bowl Classic is presenting the All-America Team as part of what has been a season-long campaign to promote the 75-year history of this prestigious honor. Each All-American will receive a commemorative football and the first-team selections will be presented with a custom All-America watch.

"We are honored to partner with the FWAA to recognize the very best athletes at their respective positions in our game," said Rick Baker, Goodyear Cotton Bowl Classic President/CEO. "These young men join a remarkable fraternity of college football greats before them, and now their names and accomplishments will forever be marked in history."

Since 1945, the FWAA team has been among the five used in the NCAA's selection of an annual consensus All-America team in college football. Since the 2002 season, the American Football Coaches Association (AFCA), The Associated Press, The Sporting News and the Walter Camp Football Foundation have joined the FWAA as the five designated selectors by the NCAA.

The top two teams in the College Football Playoff · Ohio State (5) and LSU (4) · lead all programs on the combined first and second teams. The Buckeyes tied for the national-high with three first-team members led by the Bronko Nagurski Trophy and Bednarik Award winner, defensive end Chase Young, along with defensive back Jeff Okudah and running back J.K. Dobbins, who was selected as an all-purpose player. Quarterback Justin Fields and offensive lineman Wyatt Davis are on the second team. LSU's Burrow, who set multiple SEC passing records and is on pace to break more, is the first-team quarterback along with his main target, Biletnikoff Award-winning wide receiver Ja'Marr Chase. Burrow also won the Maxwell, Davey O'Brien and Walter Camp Awards, and joins offensive lineman Lloyd Cushenberry III and defensive back Derek Stingley Jr., who are second-team members.

Stingley is one of three freshmen on the team as part of 34 underclassmen. There are 19 seniors and 19 juniors on the roster along with one graduate student. Earning their second All-America honors from the FWAA are running backs Jonathan Taylor of Wisconsin (first team in 2018 as well) and Travis Etienne of Clemson (second team both seasons) and offensive lineman Calvin Throckmorton of Oregon (second team both seasons). The conference breakdown is: Big Ten (12), SEC (11), Big 12 and Pac-12 (9), ACC (8), Conference USA (2), Mountain West (2) and American Athletic (1). There are 11 players from Texas · seven on the first team · and five each from Florida and Louisiana.

It has been a big year for the Big Ten and its nine first-team members. Wisconsin ties Ohio State for the most first-teamers with three, highlighted by Taylor, the school's career rushing record-holder and two-time Doak Walker Award winner, center Tyler Biadasz, the Rimington Trophy winner, and linebacker Zach Baun, one of the national leaders in tackles for loss. Wisconsin closes the decade having had an All-American in nine of 10 seasons, a string that began with offensive tackle Gabe Carimi winning the Outland Trophy in 2010. Ohio State's five players are the most it has ever placed on an FWAA All-America team and the Buckeyes placed three on the first team for the first time since 2002. Their first-team trio ties four other seasons behind only the 1944 team's four members for the most first-teamers in school history. Ohio State has had at least one FWAA All-America player in six of the last seven seasons.

Minnesota's Winfield Jr. is the Gophers' first All-American since 2014 and only their second since two-time All-America center Greg Eslinger won the Outland Trophy in 2005. He is Minnesota's first All-America defensive back since 1999. Iowa offensive lineman Tristan Wirfs and kicker Keith Duncan give the Hawkeyes All-Americans in seven consecutive seasons and marks the second time in three seasons for them to have two first-teamers. Penn State, which takes on Memphis in this year's Goodyear Cotton Bowl Classic at Noon ET on Dec. 28 on ESPN, completes the Big Ten field with linebacker Micah Parsons on the second team.

LSU's four All-Americans mark its highest total ever and, with Burrow and Chase on the first team, this is the 10th time for the Tigers to have at least two first-teamers in a season. LSU has had at least one All-American in three of the last four seasons. Georgia, with J.R. Reed in the secondary and Outland Trophy semifinalist Andrew Thomas on the offensive line, placed two on the first team for only the third time in its history and has now had an All-American in three straight seasons.

Kentucky, with Ray Guy Award winner Max Duffy on the first team, now has back-to-back first-teamers for the first time since 1949-50. Linebacker Josh Allen was the 2018 Bronko Nagurski Trophy winner and Bob Gain was a two-time All-America offensive tackle selection (1949-50) and the 1950 Outland Trophy winner. The Wildcats also have offensive lineman Logan Stenberg on the second team. Alabama punt returner Jaylen Waddle earned the Crimson Tide a first-team selection for a 12th consecutive season. Auburn's Derrick Brown is the Tigers' first first-team selection since 2016 and Florida defensive back C.J. Henderson is Florida's first All-American since 2016.

The Big 12 tied the Pac-12 with nine selections but has the best distribution among all the conferences, as seven of its 10 schools are represented on the combined team. Oklahoma extended its All-America streak to six years and has had at least one first-teamer (wide receiver CeeDee Lamb this season) in four consecutive years. Sophomore center Creed Humphrey is on the second team. Oklahoma State running back Chuba Hubbard gives the Cowboys an eighth first-teamer this decade and 10th in the last 12 seasons. Baylor and TCU have their first All-Americans since 2015; Baylor's James Lynch is the Bears' third defensive All-America player since 1991, and this is only the third time (2015, 1955) for TCU to have two All-Americans (Jeff Gladney and Jalen Reagor) in the same season.

Utah defensive linemen Bradlee Anae marks the third time in the last four seasons that the Utes have had a defensive player on the first team and four of the last six, and also has defensive lineman Leki Fotu on the second team. Prior to 2014, Utah had only two All-Americans on defense. The Utes have had an All-American in five consecutive seasons with a Pac-12-high three this season with running back Zack Moss on the second unit. Oregon ends the decade with two All-America picks from its offensive line, Outland Trophy winner Penei Sewell and two-time selection Throckmorton. Evan Weaver is Cal's first All-American since 2006 and the Bears' fourth since 2000.

Kansas State has had only 14 All-Americans but has a current string of three in a row. Three of the last four have been return specialists, including Joshua Youngblood this season. Iowa State tight end Charlie Kolar is the Cyclones' second All-American in the past three seasons and is Iowa State's seventh all-time honoree. Texas Tech has had an All-American in consecutive seasons for a fifth time now with linebacker Jordyn Brooks.

Pitt defensive lineman Jaylen Twyman is the Panthers' first defensive All-American since Aaron Donald won the Outland Trophy and Bronko Nagurski Trophy in 2013. Miami's Greg Rousseau is the Hurricanes' second All-American since 2005. Wake Forest has back-to-back All-America selections for the first time as kicker Nick Sciba earned this year's nod, and punt returner Greg Dortsch earned it in 2018. Syracuse has had an All-American in three consecutive seasons thanks to its special teams; it has punter Sterling Hofrichter this year after placing kicker Andre Szmyt on the 2018 first team.

Michael Pittman Jr. is USC's first All-American since a three-year run from 2014-16 and only the Trojans' fourth choice this decade. Hamilcar Rashed is Oregon State's sixth All-American and first since 2013. Brandon Aiyuk gives Arizona State an All-America selection in three of the last four seasons. Prior to that string, no Sun Devil had earned the honor since defensive end Terrell Suggs won the Bronko Nagurski Trophy in 2002.

The FWAA's All-America Committee selected this 76th annual team based on nominations from the entire membership. This is just the seventh season in the modern era (post-1950) that the FWAA has named a second team. The FWAA also selected an all-purpose player for a third time, which made for a 54-man full team.

After LOOK folded, the FWAA started a long association with NCAA Films (later known as NCAA Productions), which produced a 30-minute television program. The team was part of ABC-TV's 1981 College Football Series. From 1983-90, the team was introduced on either ABC or ESPN. In 2002 and '03, the All-America team was honored with a banquet at the Citrus Bowl.

Some of the true greats of the writing profession have helped to select this team over the years: Grantland Rice, Bert McGrane, Blackie Sherrod, Furman Bisher, Pat Harmon, Fred Russell, Edwin Pope, Murray Olderman, Paul Zimmerman · and the list goes on and on. The FWAA All-America team is steeped in tradition and history and is selected by a writers' group with those same attributes.

The Cotton Bowl Classic was formed in 1937 with the mission of providing the most innovative of all college football bowl games and to be a leader in creating premier college sports experiences for universities, student athletes, sponsors and the community. Since the inaugural game in 1937, the Classic has contributed nearly a billion dollars to higher education. Each year, football fans attending the Cotton Bowl Classic generate more than $30 million in direct spending for the North Texas community.

The Football Writers Association of America, a non-profit organization founded in 1941, consists of more than 1,400 men and women who cover college football. The membership includes journalists, broadcasters and publicists, as well as key executives in all the areas that involve the game. The FWAA works to govern areas that include game day operations, major awards and its annual All-America team. For more information about the FWAA and its award programs, contact Steve Richardson at tiger@fwaa.com or call 214-870-6516.