DALLAS (FWAA) — Oregon tight end Cam McCormick is the 21st annual recipient of the Capital One Orange Bowl-FWAA Courage Award. McCormick bounced back from multiple season-ending injuries and overcame several family and personal struggles to play in every game for the No. 15 Ducks this season, his seventh with the program. 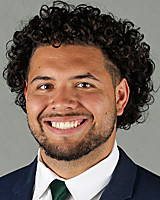 The 24-year-old McCormick has missed the majority of four college seasons at Oregon. In January of 2017, he was one of three Ducks players hospitalized with rhabdomyolysis after high-intensity workouts. McCormick overcame an auditory processing challenge to graduate early from high school and to earn two degrees from Oregon.

McCormick is estranged from his biological father, drifting apart after he and his mother moved across the country and back when he was a child. He has not spoken to his father since he enrolled in college in 2016.

“It is extremely humbling to be selected for the Capital One Orange Bowl-FWAA Courage Award,” McCormick said. “I am full of emotion and gratitude to be this year’s recipient, as there were so many deserving nominees. Without the insurmountable support I’ve received over the years from my family, friends, teammates, coaches, support staff, and most importantly the training staff, I wouldn’t have had the courage to continue to persevere and overcome so many challenges throughout the years.

“I need to give a special shoutout to the journalists who took interest in my story and invested the time to tell it to others. Everyone has played an instrumental role in my journey and this award represents all of us. I am genuinely and deeply honored.”

During his senior year at Summit High in Bend, Ore., McCormick tore the anterior cruciate ligament (ACL) in his left knee. Three years later, in the opening game of his redshirt sophomore season at Oregon in 2018, McCormick broke his left fibula and tore his deltoid ligament. Those injuries required three surgeries and forced him to miss the rest of the 2018 season, along with the entire 2019 and 2020 seasons.

The 6-foot-5, 260-pound McCormick returned for the 2021 season, and he made a 16-yard reception on third-and-8 during the Ducks’ road upset at No. 6 Ohio State in the second game of the season. It ended up being his first and only catch of the year, as he tore the Achilles in his right foot while making the play, costing him the rest of the 2021 campaign.

McCormick was close with fellow Oregon tight end Spencer Webb, who died during a climbing accident in July. He spoke at his fallen teammate’s celebration of life, and he wore Webb’s No. 18 jersey during the Ducks’ Sept. 10 home opener this season against Eastern Washington.

Webb’s memory is honored through a tattoo on McCormick’s right leg, one of Webb’s many tattoos.

“We couldn’t be more proud of Cam. He has been through so much both on and off the field throughout his life, and has never given up or stopped fighting to reach his goals,” Oregon Head Coach Dan Lanning said. “His ability to persevere and overcome hardship while always maintaining a positive attitude is truly inspiring. Cam is a great role model and a tremendous leader for our football team. He works hard and always treats people the right way, a testament to how he was raised by his mom, Deb, and his support system.

“He is a true Man of Oregon and is incredibly deserving of this honor.”

“Cam McCormick embodies what the Courage Award is all about,” former FWAA President Matt Fortuna said. “The injuries alone that he has had to deal with would have wrecked a lesser man. The grace with which Cam has handled all that life has thrown his way, both on and off the field, makes him an exceptional honoree amid a field of so many admirable individuals.”

Oregon finished the regular season at 9-3 and was tied for second place in the Pac-12 with a 7-2 conference record. The Ducks will face North Carolina in the San Diego County Credit Union Holiday Bowl on Dec. 28 at Petco Park.

The Courage Award was first presented by the Football Writers Association of America (FWAA) in 2002. A select group of writers from the FWAA vote on the winner each year. The requirements for nomination include displaying courage on or off the field, including overcoming an injury or physical handicap, preventing a disaster or living through hardship. McCormick will be included in festivities during Capital One Orange Bowl week and recognized during the game.