DALLAS (FWAA) – North Carolina’s Tylee Craft is this week’s nominee for the 2022 Capital One Orange Bowl-FWAA Courage Award. Craft, a junior wide receiver, was diagnosed with a rare form of cancer earlier this year but has been heavily involved with the football program while sharing his journey with the public to raise awareness for the disease. 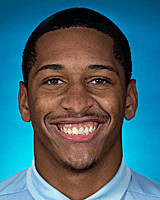 "It was natural just to try to think positive, and I knew I had to think positive and set goals for myself to look for and to get to down the line," Craft told the Daily Tar Heel. "So I can beat this and not just get caught up in the moment and feel sorry for myself and ‘Why me?' — I’m just staying positive and rolling with the punches that I was thrown.”

In March, Craft was diagnosed with Stage 4 large cell neuroendocrine carcinoma, a rare form of lung cancer. His lesions are currently stable, and he has one round of chemotherapy remaining, followed by a round of scans to determine the next course of action. Through it all, Craft has attended practices, workouts and meetings, all with the intent of one day returning to the field for the Tar Heels.

Craft has looked to inspire those who are battling the disease, visiting UNC Health every Friday before home games to visit with patients and their families, sharing his story and offering encouragement. Craft, a native of Sumter, S.C., has also become an ambassador for the White Ribbon Project, which brings together people who are dealing with lung cancer and builds awareness around the disease.

The 6-foot-5, 200-pound Craft appeared in 11 games across his first two seasons with the Tar Heels, who are currently No. 15 in the College Football Playoff rankings and are all alone in first place of the ACC Coastal division at 8-1 overall and 5-0 in conference play.