DALLAS (FWAA) – Florida A&M’s James Spady is this week’s nominee for the 2022 Capital One Orange Bowl-FWAA Courage Award. Spady, the Rattlers’ tight ends coach, returned to the practice field last week after suffering a medical episode in the season opener that caused him to temporarily lose his vision. 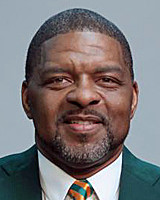 "Football is my passion. Coaching is my passion," Spady told The Tallahassee Democrat earlier this season. "The goal all along has been to put myself back in position to get back to my normal life to mentor young men and compete."

Spady had suffered a medical emergency during Florida A&M’s first game of the season, Aug. 27 at North Carolina. He spent nine days in the hospital before returning home to Tallahassee. Hannah Henry, the wife of Rattlers offensive coordinator and offensive line coach Joseph Henry, organized a GoFundMe to assist with medical expenses and home modifications. The page surpassed its $20,000 goal.

The 56-year-old Spady, who is also Florida A&M’s associate head coach, has been with the Rattlers since head coach Willie Simmons took over ahead of the 2018 season. Spady, who is in his 30th year as a college coach, served as the head coach at Alabama A&M for four seasons before that.

Spady was a four-year starter on the offensive line at UTEP, where he earned first-team All-Western Athletic Conference honors.

Florida A&M is on a five-game winning streak after an 0-2 start, and it is tied for second place in the SWAC East Division at 3-1 in conference play.