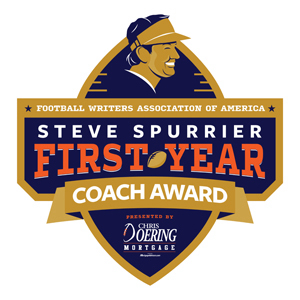 Spurrier was known for his innovation as a College Football Hall of Fame quarterback and coach, so it seems only fitting Spurrier would get creative in his first year as the namesake for the award.

"Well, there are two coaches this year because they are both very deserving," Spurrier said. "Preseason, their teams were picked at the bottom of the league, 12 and 13, but instead of gloom and doom they took their players and improved every game and both finished 7-6."

It's the second time the 43-year-old Heupel has won the award, which began in 2001 but is in its first year being sponsored by Doering and named after Spurrier.

Heupel, like Spurrier a former All-America quarterback in his day, was the FWAA First-year Coach of the Year at UCF in 2018.

Tennessee achieved a winning record coming off a 3-7 campaign that ended with the previous coach fired and the program under the cloud of an NCAA investigation.

The Vols lost 38 players off the previous team, including seven former starters to the transfer portal, and Heupel went to work in a rapid reload circumstance. One of the ways Heupel rebuilt Tennessee into a winning program was with a lightning-fast offense, that at times averaged more snaps per minute than any other Power 5 program.

Former Virginia Tech quarterback Hendon Hooker helped lead the way with 2,945 yards passing, 31 touchdowns and just three interceptions as Tennessee improved its scoring from 21.5 points per game in 2020 to 39.3 this season. The Vols' 6,174 total offensive yards in 2021 are the most in program history, eclipsing the previous mark of 5,794 set by the 1997 team led by Peyton Manning.

Beamer, son of celebrated Virginia Tech coach Frank Beamer, is the second South Carolina coach to win the award. Spurrier actually won the award in 2005 in his first season leading the Gamecocks.

Beamer, 44, took over a downtrodden South Carolina team coming off a 2-8 campaign. The Gamecocks scratched and clawed for each victory, from the time projected starting quarterback Luke Doty suffered a foot injury in August. That led Beamer to get creative, perhaps in the spirit of Spurrier, and use graduate assistant coach Zeb Noland at the quarterback position. When Noland went down with an injury, former St. Francis (Pa.) QB Jason Brown took over and led South Carolina to landmark wins over Florida and Auburn in his four starts.

Beamer's quarterback rotation wasn't finished: Dakeron Joyner, a quarterback in high school who played receiver at South Carolina, lined up under center in the bowl game against North Carolina. Joyner won MVP honors as the Gamecocks beat the Tar Heels 38-21 in the Duke's Mayo Bowl in Charlotte for the program's first bowl win in four years.

South Carolina, notably, became only the second program in history to win games with four different quarterbacks in one season (Utah State, 2014).

Spurrier was impressed with Tennessee's explosive offense all season and then was among the first to congratulate Beamer after the bowl win.

"It's extremely important for coaches in their first year that they come in with no excuses," Spurrier said. "They don't say give me two or three years, they eliminate excuses, they take the team they got and add to it the best way they can, and they go and compete."

That's what Spurrier did at all three Power 5 programs he led in his career. Spurrier began his college head coaching career at Duke in 1987, where he had previously served as offensive coordinator from 1980-82.

The Blue Devils improved from 4-7 to 5-6 in his first season, and by the time Spurrier left Durham in 1989 he led his team to an ACC co-championship.

Spurrier's turnaround at Florida was immediate in 1990, as he took a Gators' bunch that was 7-5 in 1989 to a 9-2 season and a finish atop the SEC in his first year. Spurrier led his alma mater for the next 11 years, winning six SEC championships and the 1996 national championship. He was also a five-time winner of SEC Coach of the Year during that time span.

After a brief stint in the NFL, Spurrier took over South Carolina in 2005 and led the Gamecocks to a 7-5 season that included wins over Florida and Tennessee in the same season for the first time in program history.

"It's an honor and a privilege to sponsor the naming of the First-Year Coach Award for Coach Spurrier," said Doering, former player for Spurrier in both college and the NFL and currently a football analyst for SEC Network. "He was successful as a first-year coach at three different programs and he took great pride in each, assuming the reigns, immediately creating a culture that staff and athletes want to be a part of and achieving success in those efforts, that’s the very definition of this award."

A trophy presentation and reception will be held at Spurrier’s Gridiron Grille on Monday, Feb. 21.

Chris Doering Mortgage, based in Gainesville, Fla., was established in April 2007 as a residential lending company providing mortgage products including conventional, FHA, USDA and VA loans. The branch is a division of MortgageAdvisors.com – 3940 NW 16th Blvd., Suite A, Gainesville, FL 32605 – NMLS 70168/1937321. FHA Lender ID 2631500094. Chris Doering Mortgage is committed to skillfully and ethically delivering the highest quality customer service throughout the mortgage process, with a team of professionals that strive to exceed the expectations of clients and business partners while continually educating and adapting to the changing needs of the industry. For more information, visit ChrisDoeringMortgage.com.