UCLA is Cheez-It Bowl National Team of the Week

DALLAS (FWAA) – The upstart UCLA Bruins pounded LSU on the ground with 210 rushing yards that set up quarterback Dorian Thompson-Robinson to throw for 260 more with three touchdowns in a decisive 38-27 win in the Rose Bowl in the first meeting between the tradition-laden programs. For the performance that improved them to 2-0 on the season, the Bruins have earned the Cheez-It Bowl National Team of the Week honor for games of the extended weekend of Sept. 4, as selected by the Football Writers Association of America. 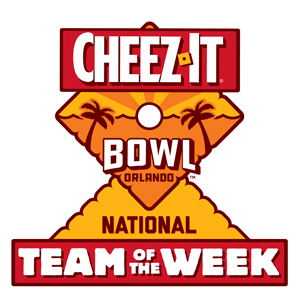 The Bruins got a standout performance from their offensive line as running back Zach Charbonnet followed up a three-touchdown game against Hawaii with 117 yards and a touchdown against LSU on just 11 carries. Brittain Brown added 96 yards and another touchdown as UCLA out-rushed LSU, 210-49; the Tigers gained just three rushing yards in the first half. Tight end Greg Dulcich was the top target for Thompson-Robinson with three catches for 117 yards that included a 75-yard touchdown.

"I'm proud of this team," Thompson-Robinson said after the game. "We knew we could do it all along. We didn't listen to the noise, blocked all that out and played for each other tonight."

This is the 20th season the FWAA will select a national team of the week. Each honored team will receive a custom Cheez-It "care package" along with a hand-crafted game ball made in America by Dallas-based Big Game USA, the nation's leading manufacturer of custom footballs. For UCLA, this marks the fourth time the program has earned this distinction and the first time since the 2017 season.

The other National Team of the Week nominees for the weekend of Sept. 4 are:

About the Cheez-It Bowl
The Cheez-It Bowl takes place on Wednesday, Dec. 29 at 5:15 p.m. ET in Orlando, Fla. The postseason contest is hosted by Florida Citrus Sports, a Central Florida-based nonprofit, and annually features top teams from the Atlantic Coast and Big 12 Conferences. Cheez-It®, the best-selling cracker brand in the United States, signed on as the game's title sponsor in 2020 as part of its season-long support of college football. Last bowl season, No. 21 Oklahoma State beat No. 18 Miami 37-34 in front of an audience of Cheez-It "Wheel Live Fans." This year's Cheez-It Bowl will be the 32nd edition of the game and its 21st in Orlando.